Where the church of Zoodochos Pigi with its Holy Water is located today, Agathon hid the holy relics and made a hermitage after he arrived on the island at 803 AD. He contacted the residents of the nearby villages of Karyni and Pentilis, gained their trust and respect and revealed his secret. Slowly then, the faithful began to come to the hermitage to worship and some of them moved close to Agathon. Thus, at the beginning of the 9th century, a small monastery was created, and small houses were slowly being built around it where the people from the surrounding villages settled. Zoodochos Pigi was the beginning, the root of today’s village.

(Translated excerpt from the text by Mr. Michalis Koromilas and available in the first Tour Guide to Agiasos, published by the Progressive Association of Agiasos)

Continue your treasure hunt in Agiasos or click bellow to find them all! 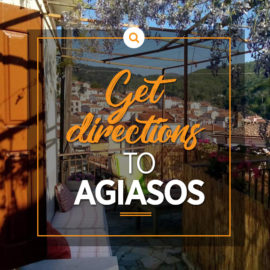